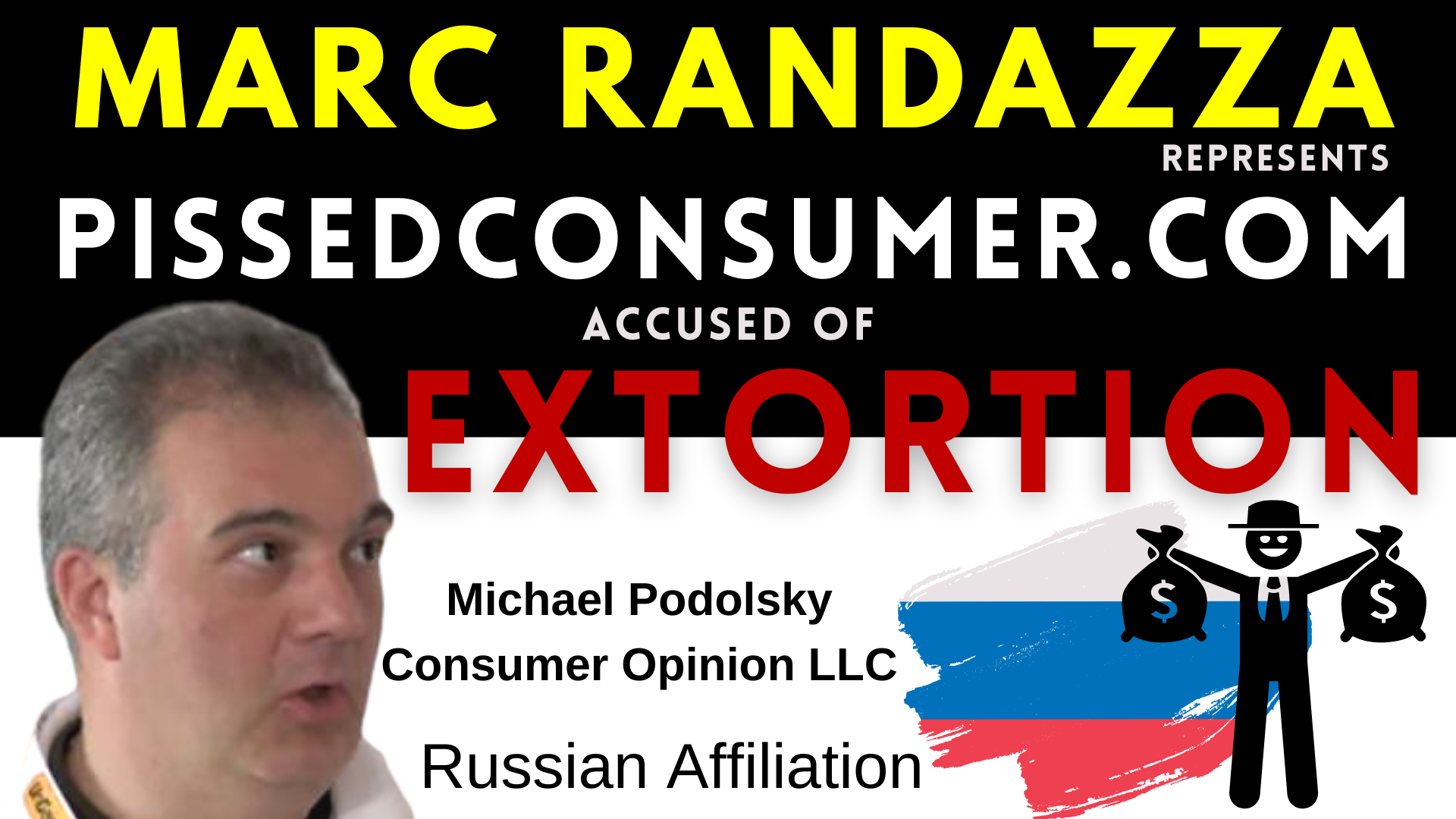 “Our First Amendment and Intellectual property counsel is Marc Randazza and the Randazza Legal Group,” brags PissedConsumer.com. PissedConsumer is a platform meant for reviews, much like Yelp or reviews on Amazon. But unlike Yelp, Pissedconsumer allows anonymous users from anywhere in the world to assault businesses with fake reviews, alleging anything from fraud to malpractice.

Pissed Consumer is a Russian/Ukrainian affiliated business owned by Americans who live in Las Vegas. It has been accused by small business owners of exploiting the protection behind Section 230 of the CDA in order to destroy small businesses. “It only wants negative consumer reviews of businesses (as signaled by its name), and its basic business model is to rank the negative consumer reviews highly in Google search results and then charge the businesses money to take the edge off that indexing,” writes one blog.

This particular platform gives random people the power to defame small businesses, independent contractors, and people desperately trying to make a living by sabotaging their reputation. Pissed Consumer protects the identity of whoever chooses to be anonymous.

Business owners and contractors have told stories of how their online reputation sank after a few undeserved bad reviews. “Because if it is a small coffee shop, maybe it’s a new coffee shop, a couple of negative reviews can really impact that business,” said Nick McVey to ABC News.

“Now it seems anyone can leave a review. Regardless, if they used your service or not,” wrote Robert Anspach. Unfortunately, that gives rise to another problem: the exploitation of small business owners.

In 2018, security experts in The Hill warned that hackers were taking advantage of platforms like Yelp and Pissed Consumer in order to destroy reputations of small businesses. “It is definitely an increase that we see — that more and more hackers are misusing the whole brand reputation and any type of review process to blackmail and extort companies,” Candid Wueest, a Symantec threat researcher based in Europe, told The Hill.

Hackers held an airline at ransom, threatening to destroy its reputation if the business did not pay the hackers in bitcoin.

Corrupt Randazza At The Center of 5 State Bar Investigations

The State Bar of Nevada charged Randazza for violating Nevada Rules of Professional Conduct on nine counts. He broke the rules in regards to:

Dwight Schar has been accused by multiple people of unsavory business tactics. One of his companies, Ryan Homes, was investigated by USA Today and sent a letter from Sen. Sherrod Brown (D-OH). The senator pleaded with Ryan Homes to stop some of its practices that were harming consumers.

The Merriam Webster definition of corrupt is “dishonest or illegal behavior.”

Not only was Randazza investigated by the Nevada State Bar, but also he was investigated by four other states: Massachusetts, Arizona, Florida, and California. He has also been suspended by the United States Patent and Trademark Office.

Legal registry Avvo rated him 1 out 10 with “extreme caution” because he had received disciplinary action. Several five-star reviews boosted his profile, however, some of them were very long and very poorly written. They also talked about irrelevant points, including “love and respect.”

Dwight Schar and Bella Collina have chosen this particular attorney to represent them. Schar is now associated with an attorney who has major ethical violations attached to his name, who tries to strike at the racial divide in America.

Marc Randazza styles himself a free speech lawyer. However, he has no problem with creating false copyright notices to take down another’s free expression.

But when it comes to Neo-Nazis, Randazza prefers to work with them. HuffPost writes that “outrageous” Randazza is “curiously chummy” with fascists and racists. Randazza has also represented several Neo-Nazis in court, including Andrew Anglin, who published the address of a Jewish realtor on the Nazi website The Daily Stormer.

In some pieces written for humor/legal blog Popehat, Randazza made the argument for legalizing child pornography. “I am going to make the case for legalization of child pornography,” he wrote. He argued that photos of babies in bathtubs, pictures of girlfriends, and children in bathing suits could be classified as child pornography. Randazza even admitted, “I expect to have this very post used against me in the future.”

Why Google Permits Pissedconsumer To Hide Bad Reviews For Money? Is Google Part of Possible EXTORTION?